The Controversy and Brilliance of Ice Cube’s Death Certificate

An excerpt from Original Gangstas: The Untold Story of Dr. Dre, Eazy-E, Ice Cube, Tupac Shakur, and the Birth of West Coast Rap

Amid rising gang violence, the crack epidemic, and police brutality, a group of unlikely voices cut through the chaos of late 1980s Los Angeles: N.W.A Led by a drug dealer, a glammed-up producer and a high school kid, N.W.A. gave voice to disenfranchised African-Americans across the country. And they quickly redefined pop culture across the world. Their names remain as popular as ever: Eazy-E, Dr. Dre, and Ice Cube. Dre soon joined forces with Suge Knight to create the combustible Death Row Records, which in turn transformed Snoop Dogg and Tupac Shakur into megastars.

In his upcoming book, Original Gangstas, award-winning journalist Ben Westhoff explores how this group of artists shifted the balance of hip-hop from New York to Los Angeles. He shows how N.W.A’s shocking success led to rivalries between members, record labels, and eventually a war between East Coast and West Coast factions. In the process, hip-hop burst into mainstream America at a time of immense social change, and became the most dominant musical movement of the last thirty years.

Featuring extensive investigative reporting, interviews with the principal players, and dozens of never-before-told stories, Original Gangstas is a groundbreaking addition to the history of popular music. Below, enjoy the first in a series of exclusive excerpts from the book.

For rapper Ice Cube, fighting back was in his blood. Some of his older siblings had been involved in protests surrounding the Watts riots in 1965. His own foray into musical activism began with N.W.A’s controversial 1988 protest anthem “Fuck tha Police,” which he conceived and co-wrote. It became the soundtrack to the L.A. riots.

In the early ‘90s, after he left N.W.A, Cube began speaking publicly on the ideals of the Nation of Islam. The organization combines traditional Islam with mystical and biblical teachings, along with the principles of self‑reliance and racial separatism. Following Malcolm X’s murder in 1965 it reached its greatest heights—perhaps a half million followers. After the death of Elijah Muhammad a decade later the Nation splintered and its popularity waned, only to be revived under the leadership of Louis Farrakhan in the ‘90s.

In an act of solidarity in 1991, Cube cut off his trademark jheri curl. It was a symbolic baptism of sorts that exorcised him of the “toxins” in his hair, following in the advice of black pride advocates like Marcus Garvey. Though Cube never officially joined the Nation of Islam, he was nonetheless inspired by Farrakhan and his right-hand man, Nation minister Khalid Muhammad. Muhammad rose to prominence in the ’80s and commissioned a multimillion‑dollar mosque in South Central Los Angeles, where Cube grew up. Known for flashy cars and designer suits, Muhammad initiated community‑building programs and fearlessly recruited from the most dangerous neighborhoods. His teachings emphasized that African-Americans had been historically mistreated but were now in control of their own destinies.

Ice Cube featured Khalid Muhammad discoursing on his two‑part 1991 sophomore solo album Death Certificate, whose cover has Cube standing next to a corpse with an “Uncle Sam” tag hanging off the toe. The inset pictures include Cube reading The Final Call, the Nation’s official newspaper, with the headline “Unite or Perish,” flanked by Fruit of Islam members (the Nation’s paramilitary wing) standing alert to his left, and members of his backing crew Da Lench Mob in repose to his right. The album’s two halves—the “Death Side” and the “Life Side”—  continued this theme of divide, the former “a mirror image of where we are today” and the latter “a vision of where we need to go.”

For Death Certificate Cube jettisoned the Bomb Squad (who’d done production work on his debut, Amerikkka’s Most Wanted) and their pastiche approach in favor of more traditional slabs of chunky, mid-tempo funk, a production vision led by DJ Pooh, and also featuring contributions from Cube, Sir Jinx, Bobcat, and Rashad. The work was absolutely unsparing in its critiques of Cube’s perceived foes, both personal and institutional. Most notorious is “No Vaseline,” directed at his former N.W.A groupmates and one of the greatest diss tracks ever recorded.

The song’s good-time bounce only heightens its lyrics’ venom, accusing the N.W.A members of being gay and moving to white neighborhoods. They were essentially slaves to the “Jew” Jerry Heller, the track insinuates, offering the suggestion, using the Nation’s preferred synonym for white men, the group should Get rid of that devil real simple / Put a bullet in his temple. “[I]t probably hurt and affected me more than anything that’s ever been said or done to me,” Heller told reporter Harris Rosen, adding that he faced anti-Semitism growing up. “I think he’s not anti-Semitic. I think he did it just because he thought it would sell records.”

“I’m pro-black. I’m not anti-anything but anti-poor,” Cube told Creem when asked about the issue, adding that he worked with many Jewish people in the music industry.

“No Vaseline” was inspired by the insult game The Dozens, which Cube played growing up. He actually recorded the track much earlier and wasn’t sure he was going to release it at all, but after N.W.A fired at him on their 100 Miles and Runnin’ EP he felt obliged, in the grand hip-hop tradition, to come back a hundred times harder.

For the former underdog Cube, it was a knockout blow. N.W.A never responded, but Ren in particular was pissed. “I was ready to mash,” he said, adding that when he showed up at a party where “No Vaseline” was playing he demanded they turn it off. As for Cube and Dr. Dre’s relationship? They never discussed the song, Cube said.

Another Death Certificate lightning rod was “Black Korea,” which highlighted tensions between Los Angeles blacks and Korean shop owners. The song came on the heels of the March 16, 1991 killing of Latasha Harlins, an unarmed, 15-year-old African-American girl. Harlins was shot to death at a South Central liquor store following a brief scuffle with owner Soon Ja Du, who falsely believed Harlins was shoplifting a bottle of orange juice. Charged with murder, the ailing Du was convicted only of manslaughter, and did no prison time, creating widespread outrage in Los Angeles.

The city then had more than 3,000 liquor and convenience shops owned by Korean immigrants, many of whom used an old‑world system for pooling funds to raise capital. In 1990, nine different shop employees had been killed during armed assaults, and many owners lived in fear. At the same time, their black customers felt victimized by harassment and stereotyping. During the summer of 1991 numerous South Central stores owned by Koreans were firebombed, including Empire Liquor Market Deli, where Harlins was killed.

“Black Korea” is less than a minute long, but contains a multitude of epithets, blasting shop owners for assuming customers were shoplifting, and threatening: So pay respect to the black fist / Or we’ll burn your store right down to a crisp. In “Black Korea” Cube threatens to boycott the stores, but the song actually inspired a boycott of him. The target was the malt liquor he was endorsing, an upstart brand called St. Ides, which was eager to displace “8 Ball” (Olde English 800) as the favored cheap urban high‑alcohol beer. DJ Pooh was in charge of crafting a series of commercials for the beer, and so he signed up gangsta stars including Cube, who urged viewers to Get your girl in the mood quicker / Get your jimmy thicker / With St. Ides malt liquor. All told St. Ides received endorsements from a who’s who of the early ’90s hardcore rappers, including Geto Boys, Notorious B.I.G., Tupac Shakur, Dr. Dre, and Snoop Dogg. 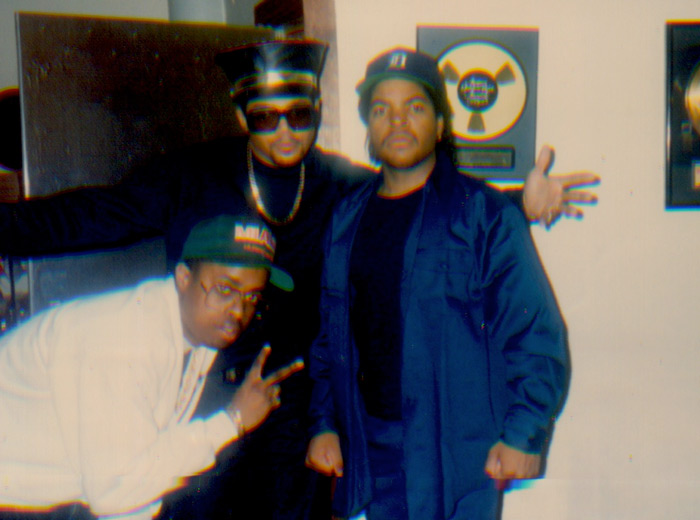 There’s no doubt the controversy spurred sales. Death Certificate made it to number two on the Billboard 200, going platinum. This despite the fact that Jewish activist organization the Simon Wiesenthal Center called on record store chains to remove it from their shelves, and many critics trashed it. The Village Voice’s Robert Christgau called Cube “a straight‑up racist simple and plain, and of course a sex bigot too.” Billboard accused the album of “hate‑mongering.”

Speaking on these controversies many years later, Cube lamented “not being as informed as I thought I was at the time.” One shouldn’t forget that he was barely old enough to drink while all this was going on. That doesn’t absolve him, but at least Cube faced his critics. In 1992 he was interviewed by Angela Davis, a former Black Panthers associate and radical feminist, who took him to task about his sexist lyrics, which are all over Death Certificate. (“Givin’ Up the Nappy Dug Out,” in addition to employing long‑expired slang, kicks off, Your daughter was a nice girl, now she is a slut.) “How do you think black feminists like myself and younger women as well respond to the word ‘bitch’?” she asked. “The language of the streets is the only language I can use to communicate with the streets,” he responded.

As a work of art, Death Certificate is one of a kind: simultaneously bigoted and socially conscious, misogynistic and uplifting. The result is an extremely compelling listen that stands with Amerikkka’s Most Wanted among the top three or four dozen rap albums ever made.

Cube’s rapping is self‑assured, hugging the beats, never seeming to strain. His storytelling is more evocative than ever, due both to his developing writing talents and his new company. Now that the former drug dealer Eazy-E wasn’t around to share his stories, Cube turned to his streetwise Lench Mob partners J-Dee and Shorty for material. “On tour nobody had cell phones, no satellite hookups, we’d hear these J‑Dee and Shorty stories, because they’re real as a motherfucker,” Cube’s collaborator Sir Jinx said, adding that thematically much of Death Certificate is “mourning” their tough lives.

This is especially evident on “My Summer Vacation,” about an L.A. drug‑dealing crew that sets up shop in St. Louis when the police heat gets too strong. They take over a local block, killing its former proprietors and raking in profits before the St. Louis contingency fights back and the justice system catches up with them.

It’s based in truth. In the ’80s, Southern California dealers fanned out around the country, taking their gang allegiances with them. “It started spreading like a virus,” said famed drug trafficker “Freeway” Rick Ross. Some were driven out of their adopted territories, but others integrated successfully, leading to strange situations in which midwestern gangbangers were, as Cube puts it in the track, “dyin’ for a street that they never heard of.”

“My Summer Vacation” came out of conversations between Cube, J‑Dee, and Shorty. J‑Dee, who had sold cocaine in cities all over the country, from Seattle to St. Paul to St. Louis, remembered a conversation they had on a layover in 1991, while Cube and Da Lench Mob walked through Dulles airport in khaki suits. “It looks like we about to take some dope out of town,” J‑Dee remembered with a laugh. “Cube asked me, ‘Why did you stop selling out of state?’ ” He explained that he’d met with too much resistance, and Shorty added details of his own. By the time the plane landed, Cube had the song written.

Ben Westhoff is an award-winning journalist whose upcoming book, Original Gangstas: The Untold Story of Dr. Dre, Eazy-E, Ice Cube, Tupac Shakur, and the Birth of West Coast Rap, will be published September 13, 2016 by Hachette Books. He writes regularly about hip-hop for The Guardian, and has also written for Rolling Stone, Vice, Pitchfork, and The Wall Street Journal. He’s the former music editor at L.A. Weekly and his 2011 book on southern hip-hop, Dirty South, was a Library Journal best seller. You can pre-order Original Gangstas here.